Anglicare NT, in partnership with a number of not-for-profit, sporting and government agencies, is hosting a breakfast to raise awareness of White Ribbon Day on Tuesday 24th November at Doubletree Hilton. White Ribbon is Australia’s national, male led campaign to end men’s violence against women. Ticket prices are $45 each or $400 for a table of 10.  Tickets are available here. 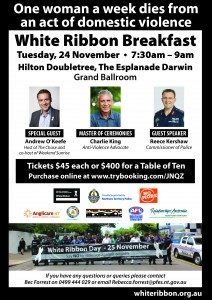 Host of The Chase and Co-host of Weekend Sunrise, Andrew O’Keefe is a household name in Australian entertainment.

O’Keefe is a past chairman of the White Ribbon Foundation in Australia, an organisation dedicated to the prevention of violence against women. He was one of the founding members of the campaign in Australia and has been an ambassador since 2004.

The campaign is active in schools, workplaces, sports clubs, councils and other community organisations, and seeks to rally men and boys as leaders in the fight against violence.

Anti Violence Advocate Charlie King has been the driving force for the NO MORE initiative that supports a zero tolerance to domestic vioence in sports. Clubs are encouraged to develop their own Domestic Violence Action Plans and the initiative has taken off in the NT with great interest from clubs right across Australia.

Earlier this year, Mr King was presented with his Medal of the Order of Australia (OAM) acknowledging his lifetime commitment to promoting an anti-domestic violence message right across the Northern Territory.

A White Ribbon Ambassador, Commissioner Kershaw was instrumental in the NT Police Force achieving White RIbbon Workplace Accreditation, recognising workplaces that are taking active steps to prevent and respond to violence against women.

Those who wish to support the critical work of White Ribbon Australia in the prevention of men’s violence against women can also make a tax deductible donation here.

If you are experiencing violence or suspect someone else is, please contact 1800 RESPECT for advice and support. In an emergency, call the police on 000.