Translate this website:
Home News Australians Back A Basic Income

Australians back a basic income

Australians overwhelmingly want a guaranteed basic income above the poverty line for every person. That is the key finding of a landmark new study from Anglicare Australia.

The Valuing Every Contribution study surveyed 1,000 Australians. It found that:

Last year, hundreds of thousands of people were lifted out of poverty through increases to JobSeeker and the introduction of JobKeeper. Lives were transformed, as many Australians had a basic income for the first time. This study shows the enormous benefits to making a basic income permanent.

Anglicare NT has a wide range of services that support people in times of need. Our staff see first-hand the impact of poverty on people’s lives. A permanent basic income would all but eliminate income poverty, benefiting our homes, families, and communities.

With a secure income, people could manage their debt, save for the future and be given an opportunity to thrive. Some could reduce their work hours and seek more flexible work arrangements, allowing them to contribute more to the community, spend time with their children or care for loved ones in need of help.

With all these benefits, it’s not surprising that so many people back a basic income. A staggering 77% of Australians want everyone to be guaranteed an income above the poverty line.

Australia made this happen for a short time in 2020. We can do it again – and lock it in for good. 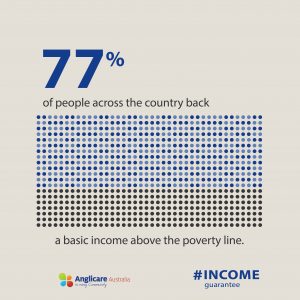